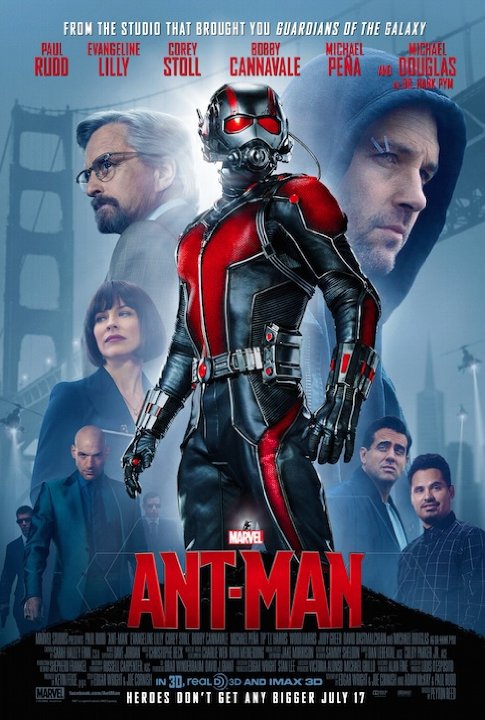 Rating: Better and more entertaining than Thor 2 and Age of Ultron. Not as good as The Winter Soldier.

Details: The nth installment of the Marvel Cinematic Universe introduces the Ant-Man, both the first ever to bear the name, genius scientist Dr. Hank Pym (played by Michael Douglas) and his successor, the-crook-with-a-heart-of-gold Scott Lang (Paul Rudd). The movie focuses on a dangerous tech arms race involving the Pym Particle, which can alter the atomic distances and density of an object –basically shrink or enlarge something or someone. Lang dons the Ant-Man suit and, alongside Pym and Hope van Dyne (daughter of the original Wasp, Janet van Dyne; played by Evangeline Lilly) and some insects, commits a heist to protect the technology from being militarized by Darren Cross, who will later become the villain Yellowjacket (Corey Stoll).

Review: Okay, I liked it. I was prepared to be disappointed with this movie, as the MCU hasn’t been coughing up quality films as of late. But I was won over by Rudd’s charming act, the well-timed humor, the multi-size action, and the ants. Actually, the ants were the cutest selling point.

The movie was a good film, but not necessarily fantastic. The sensibility and thrill of the plot suffered from the low stakes vibe, because no one was taking the whole thing seriously (which I understand was played out for comedy, fun and accessibility). But the premise itself wasn’t big by any means; while the potential of the controversial technology is indeed dangerous and can be destructive on a global level, the responsibility of imagining that kind of catastrophe is too dependent on the audience’s commitment.

Casual namedropping of the Avengers and of Hydra didn’t enhance the cohesiveness of this movie with the rest of the MCU; maybe Marvel should have put more effort in seeding this movie in previous installments. Ant-Man also felt predictable at times, from plotlines to jokes to character arcs, which points more to an unfortunate lack of creativity rather than a commendable spirit of consistency.

Marvel also continues to ignore founded criticisms on half-arsed worldbuilding in Ant-Man, with a complete disregard for the impact on civilians and public/private institutions, public commentary, how the law actually works, and the effect of heroism and actual murder (or homicide?) on the psyche.

But again, there were many good points. The script is simpler and more head-on than that of other MCU movies, which is maybe why it ended up to be more solid. Without the glaring plotholes or annoying getaways, burdens and characterizations of previous trying-to-be-complicated MCU films, Ant-Man successfully takes on a lighter tone and sets itself as a soundly enjoyable flick.

Rudd, the cute girl who plays his daughter, and even Lilly played their parts well enough to make the audience invested. The main villain, Stoll, was an entertaining character (though his script and dimension is as expected of other Marvel villains). The cameo of the Falcon was also much appreciated (though maybe that’s because I’m a fan).

The action and overall direction were good, especially with the interactive use of a shrunken environment.  The introduction of a shrinking superhero really adds a refreshing take and opens up endless possibilities for fight scenes and other adventures.

And the ants. The ants were really cute.

I’m definitely looking forward to how Ant-Man and the Wasp will fit in with the rest of MCU, but I’m really not sure how.

I do want to know more about Pym’s career as Ant-Man, though. That sounds like fun.