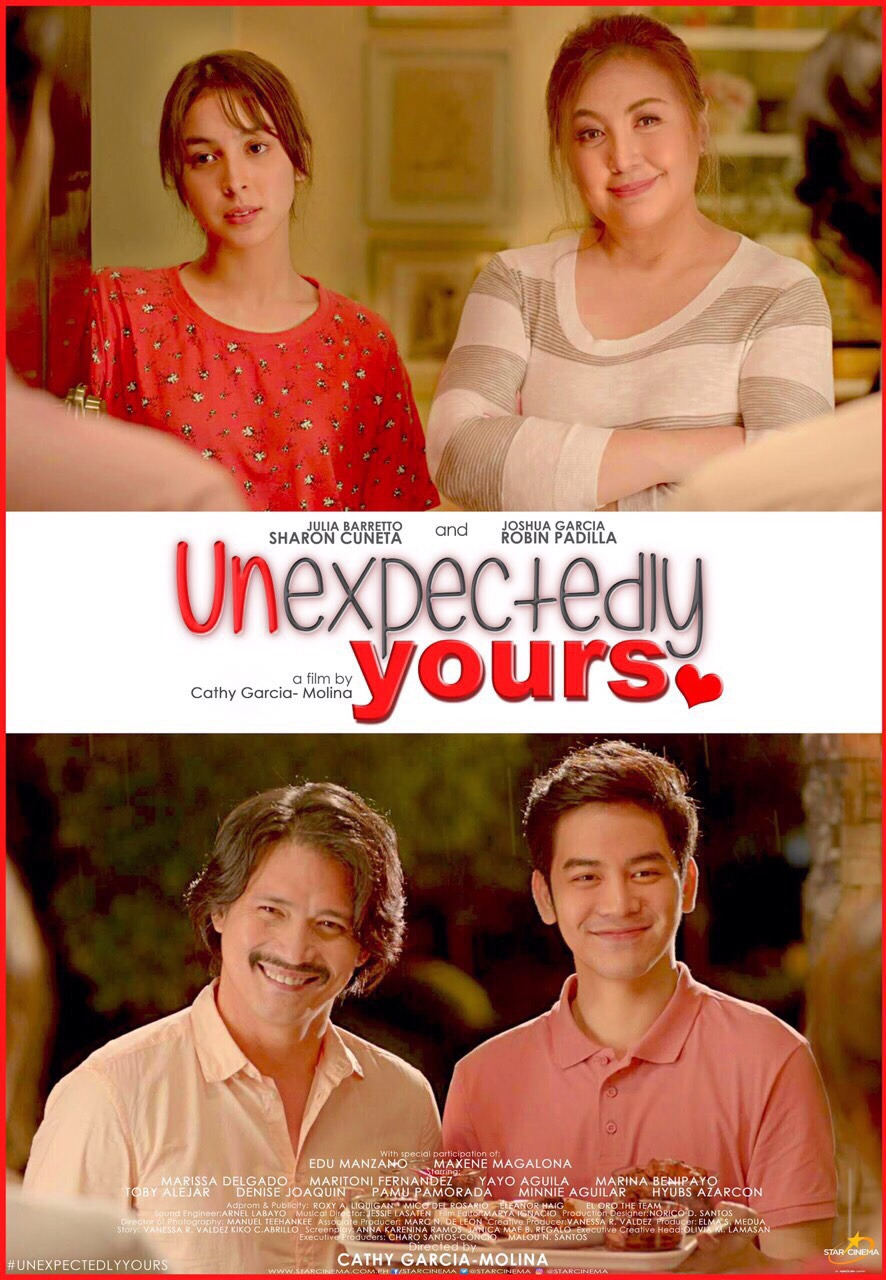 Well-produced local movies have at least one thing in common. They genuinely reflect the realities of life as a Filipino dealing with our traditions, under different conditions, surrounded by both family and friends and strangers. While Star Cinema‘s Unexpectedly Yours (2017) doesn’t exactly make it as a personal favorite, it was an unexpectedly thought-provoking and reflective film. #Relate.

Overall, Unexpectedly Yours was good. It’s apparently Graded A by the CEB. The story was coherent and material. I think there were a few loose ends when it came to Robin Padilla’s story, but there’s a reason why Sharon Cuneta got the first billing, and it’s because its her story anyway.

Honestly, the movie’s glib trailer doesn’t do the film any justice. The trailer showcased the most trivial (though entertaining) aspects of the story: the suave playboy, the uptight neighbor, and the budding love team as a subplot. It set me up for a cringey romantic comedy. And while there really was a lot of cringeworthy and also non-cringeworthy kilig moments, there was also a lot more.

You can expect a lot of cliche romantic lines, and at least one extended scene you’d be fine with going without. You’ll see a surprising amount of ribbing over Sharon Cuneta’s physical appearance, and also repeated servings of old-timer high school reunion shenanigans. But all of these add a lightness to the existential crises happening in the background, balancing and rounding out the movie.

Thematically, Unexpectedly Yours is bigger than your run-of-the-mill romance. The movie takes us along the “sunset years” of a 50-year-old professional, Patty (Sharon Cuneta). Maybe drawing from personal experience, Cuneta delivers a convincing and vulnerable portrayal of the turning of the tides.

In deference to her own mother’s conservative dreams and her own childhood aspirations, Patty had built a house of glass made of one unfaithful husband and a controlled-turned-rebellious daughter. It was a house unprepared for change.

As we grow, we greet the crises of old age. Patty faces the usurpation of a new generation (here in the form of an aptly annoying Maxine Magalona, ready to dismantle traditional office dynamics), the assertiveness of the youth (with a more weighted performance from Julia Barretto, compared to her role in LYTTSB), and the betrayal of our own bodies (as the movie repeatedly quotes: MENOPAUSE). There’s also love and sometimes the loss of it.

Robin Padilla’s Cocoy is the mustached corny catalyst Patty’s life was waiting for (with Joshua Garcia in a minor-almost-extraneous role as his helpful nephew). Through chance set-ups that were perhaps the most unrealistic recurring plot device in the movie, Cocoy gets to prompt Patty into her own realizations. Romantic love was just the cherry on top of a sundae of self-rediscovery.

This is the kind of story that bears repeating, especially for the idealistic young and the lonely elderly. The movie had a strong underlying message: these realizations and struggles of identity don’t stop when we grow out of our 20s, or even 30s. Sometimes shit happens when we’re 50, 80, 90. And sometimes we can find help from the most unlikely people.

Reminding me of my personal mentoring session last week, my thoughts on Coco (2017) and legacy, and our lectures on the family life cycle (“Emotional Process of Transition”, anyone?), the movie slowly unravels what it means to be an obedient daughter and a perfect mother, and to be a successful person versus a happy one.

Time can be a lesson on adapting, forgiving and even loving oneself. It’s a lesson on mutual respect and letting go. As Patty says in the movie to hilariously-cast millennials, “different is not always better”. But, as we learn, it’s also not always worse.

I only have a very minor qualm. A conflict in the movie is premised on “the rise of the millennials” like it’s still 2010. To movie makers everywhere, keep up. It’s already the rise of Gen Z. There is literally a generation of people who grew and are growing up without ever having known a floppy disc and a dial-up connection. They’re about to enter the workforce.

Though to be serious, I haven’t watched an objectively bad Filipino movie in awhile. But we’ll see how the upcoming MMFF goes. Until then, the last few movies I’m looking forward to this year (basically just Star Wars) probably won’t disappoint.

Side note: I’ve been watching an average of 1 movie per week recently. I need to hit a saturation point. I also need to blog about other things.