Uptown Saturday Night is apparently the title of a 1974 film. That has nothing to do with this post (or my life).

Back in Medical School

My experience the first week back in medical school probably deserves its own post; so does my last hurrah going to Laiya, Batangas for some fun with med school friends.

In the meantime, have a crappy tablet-shot photo:

I just want to share with everyone that I have so far survived my first week of grad schooling in 2018. Not much has changed. I continue to sleep late, eat healthy, and do zero exercise.

I did like our patient encounter (abdominal examination) last Friday, our clinical pathology lab session on fecal occult blood testing (as I might have said before: med school lab is on another league versus college lab) and that one surgery lecture we had from Doctor Reyes. The usual med school professors continue to inspire.

I also finally watched season 2 of Daredevil while procrastinating.

Anyway. I have an exam on Monday. But for some reason, past Jari decided to say yes to a dinner with UPM A friends the weekend before said exam.

UPM A stands for UPM Alum, I think

Time flies seriously fast. Seeing Christian, Mort and Marianne now, years after we first all met in 2013 (except for Marianne, whom I met in like 2011), is an experience. We’re all so… adult. Ish.

Our chat group has a funny story. At some point, combinations of all four of us have held the title of “UPM A” while representing the Debate Circle. Sometimes it’s in British Parliamentary or Asian Parliamentary. Unfortunately, no one has invented or popularized a format with 4 members to a team; imagine the mess of all four of us.

So the chat became pretty active when I moved to debate retirement (aka Ortigas), and I think it’s where I sent greetings of luck or whatever for their latest stints in Asian Parliamentary. Now it stands for UPM Alum, because all of us are kind of debate retired. (There are so many new kids and new faces in debate, but the drama is losing its luster.)

As the privileged people that we are, all four of us are moving on to higher education. Marianne is still one of my unofficial med school mentors. Christian is taking her masters and doing things with chemistry that I still won’t be able to understand. Aloy is on his way to either law or law.

While my saint of a sister was driving me to Uptown Mall, I had to wonder if that meant the rest of BGC that we passed was “downtown”. It was, right? That’s how geography works?

Uptown Mall is a lot prettier than the last time I went here (which was way back when the Palace Pool Club was still a place people partied in, LOL). There are definitely more shops and more people, though compared to Makati the mall still had plenty of room to breathe.

Also there were these giant Justice League statues. 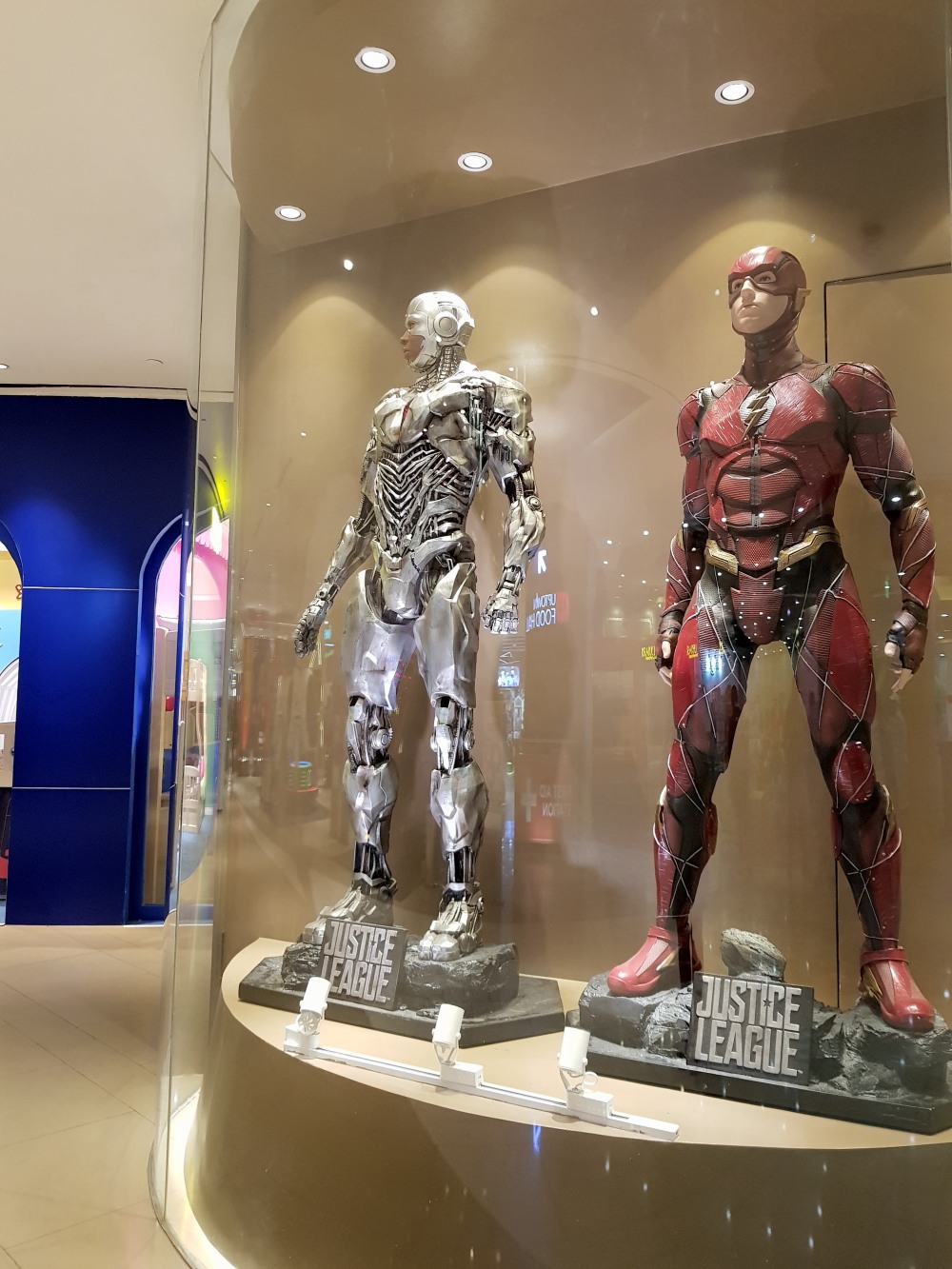 We ate (sweet? buttery? fattening???) cheeseburgers in Sweet Ecstasy in Uptown Parade (which was a bridge away from the mall). I can’t believe I broke my diet and failed to exercise this weekend. SMH. 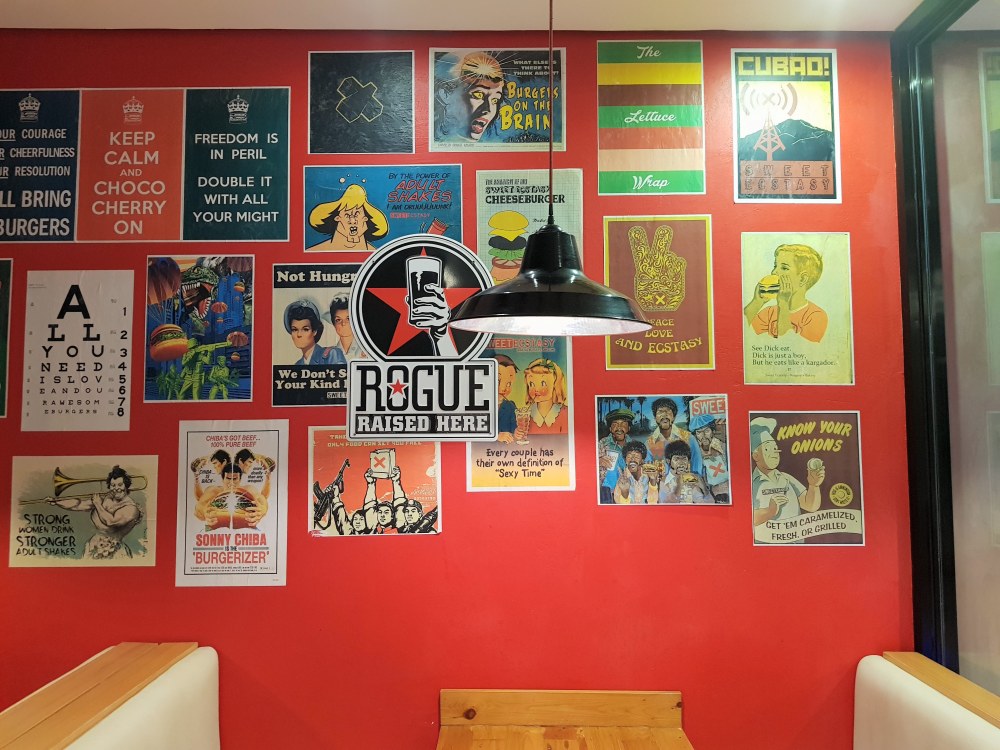 I recommend the cheeseburger combo with their fries. I was so hungry I forgot to be myself and take a picture. Sigh. Take my word for it. There’s value for money. I think the combo is just PHP288.

When I was walking around the mall before meeting up, I saw this super cute character cafe. I immediately messaged everyone else and basically demanded we have dessert and coffee there. 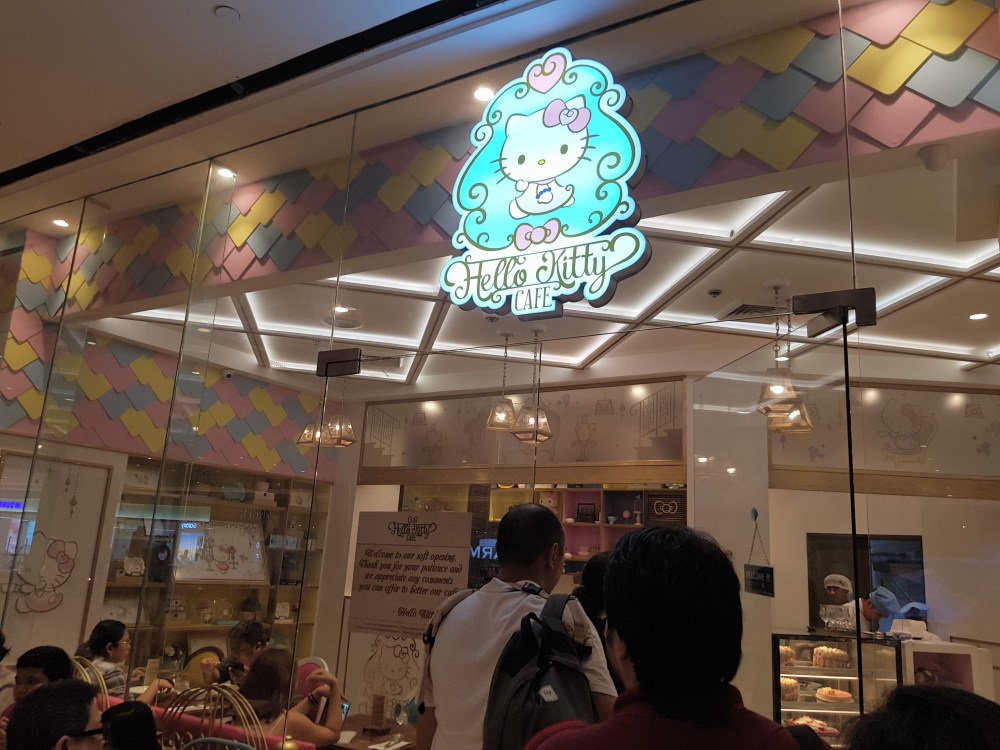 Obviously, we were the most photogenic subjects there. We were sitting inside a bird cage!!!!! 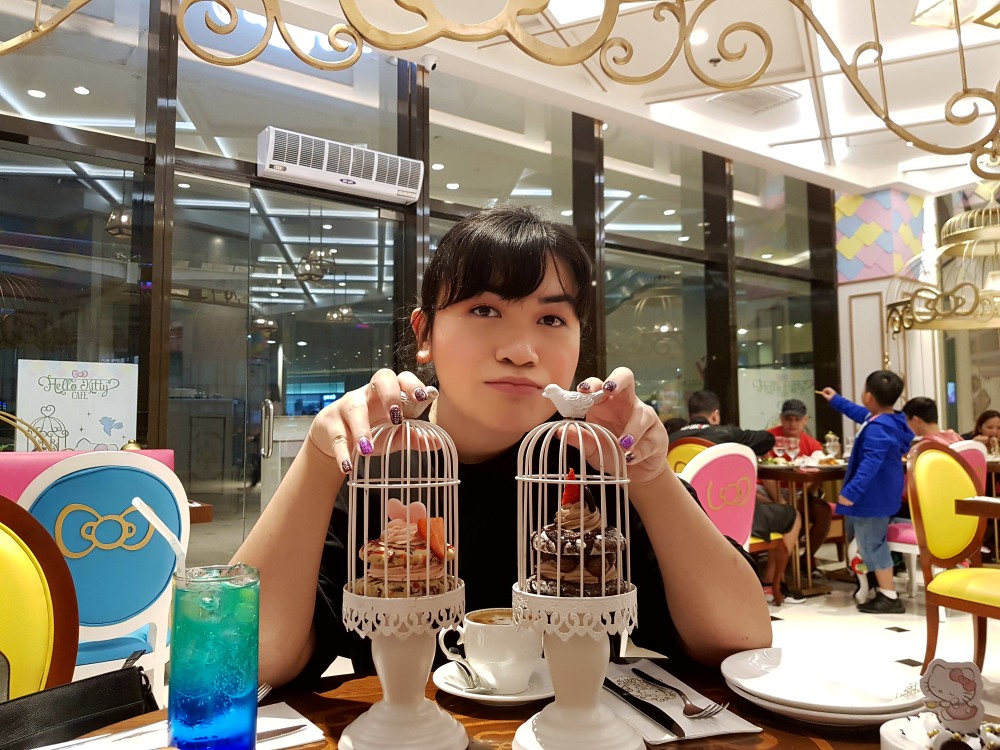 Here are the actual menu items I squealed over: coffee (Cafe Latte and Hot Mocha), biskies (Cookie Chip and Crinkles) and a choco mint profiterole. 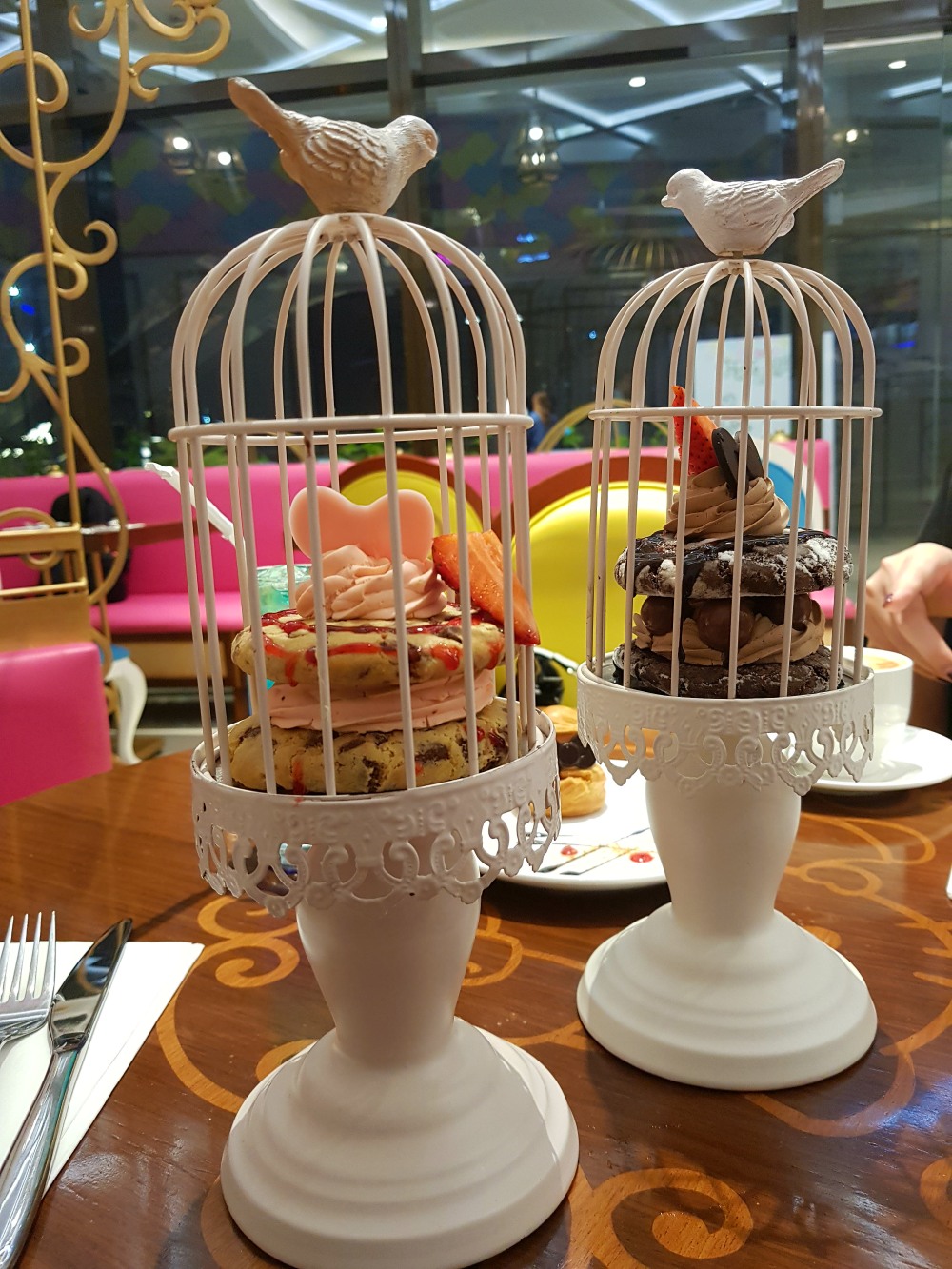 Everything was sweet and I have no regrets. 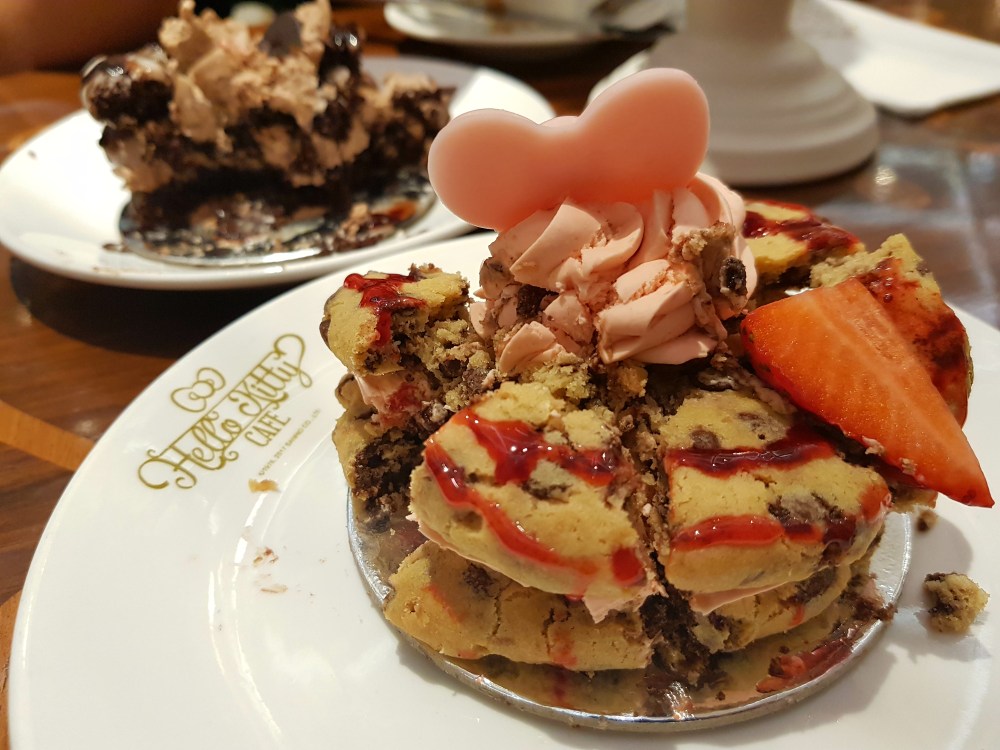 Even the water had a little Hello Kitty design to it!

(Someday, the Gudetama Cafe will come to the Philippines. Please.)

I had to go home a bit earlier than everyone else, but I think they had fun having drinks in Early Night.

And Back to Reality

I’m writing this very quick blog post in the middle of reviewing for Monday’s exam. Even though I may have lost a couple of hours of studying, I had fun. I recharged with the strength and love I’d need for the long stretch of time ahead.

Really, when you’re with the people you love… even a full day of hanging out doesn’t feel like enough. Miss you guys!!! Even now.

Back to the diseases of the gastrointestinal system!