“Even a four-year-old could do that!” and “I should have just framed my doodles!” were some whispered comments I heard over at ArtFairPH 2018. It’s nothing new. I’ve heard it when I went there in 2015, 2016 and 2017, and in probably every modern museum I’ve visited.

To answer these comments is simple, in a way. It’s not that they didn’t do it, but more that they couldn’t. There have been hundreds of “white canvas” art pieces, but they sell for millions because each one is unique.

In this day and age, what matters is the artist’s expression, intent and context. So a four-year-old can’t do that art piece, specifically, though I also won’t discount the prowess of four-year-olds in general.

To be fair, a lot of pieces with a high-asking price beg for criticism and commentary. But maybe that’s precisely why they’re there.

For sale: a cockroach for a quarter-million

Maybe the leader of the bunch is the ArtLab Gallery, with pieces from the Syjuco family of artists.

The much-talked and featured cockroach is so on point, it’s funny. The award-winning artist and Palanca award-winning poet says it best: “My work is about the power of words to transform anything into the level of art.”

It’s literally an upside-down cockroach. Unfortunately familiar, but art when you combine the case, the text and the meaning. 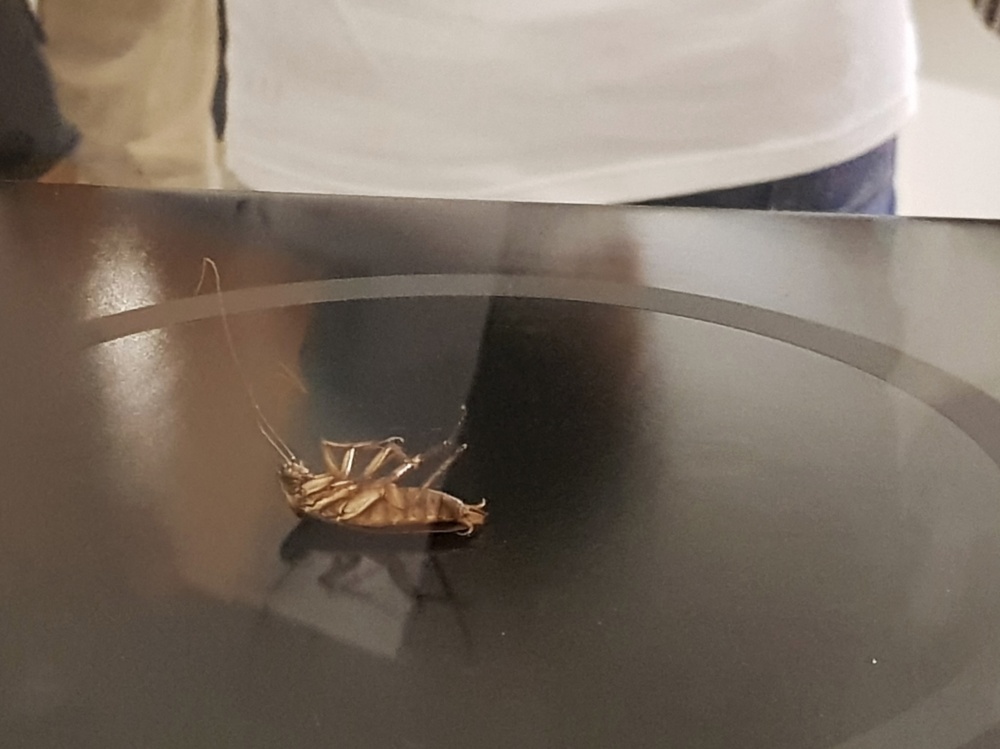 There are other works that are as curious but also less infuriating. For PHP360,000, this piece makes it clear that value is placed on art by the purveyor and the enthusiast, and not by cost of production.

But the gallery also has paintings and installations which provoke thought more obviously, instead of dealing us with post-postmodern meta acrobatics.

I need people to stop saying “Even I can do that!“. While yes, they can make something similar, they probably won’t be able to sell at such a high price. I mean, not yet.

When Ezra Pound, the modernist, defined the age with the words “Make it new,” it meant decades of artists separating from forms, the representative, and the classical. It also meant that by the postmodern era, people were generally tired of the new, because being a novelty in a sea of novelties… means nothing at all.

By contemporary times, art is defined less by a particular style or intent, and more by its expression, reference and context. Clever self-reference sells more. Good marketing sells the most.

Context is the name of the game, sometimes. Though for me, the ability to resonate is all it really takes for an artwork to become popular and profitable.

For example: how many times must I laugh at the cultural phenomenon that was the Supreme fashion collection?

I don’t actually particularly like this next piece, but I love the gallery it came from –Galerie Stephanie– so might as well include it. I do love the framing though.

Sometimes the reference goes to the specific context. There have been many site-specific installations in ArtFairPH through the years, but I found this one fun to appreciate.

The title of the installation is also in reference to a quote, which I can’t be bothered to source now. It’s funny because the art fair is held in The Link parking lot, so it’s only apt that the cars (and people) we displaced get to be remembered somewhere. 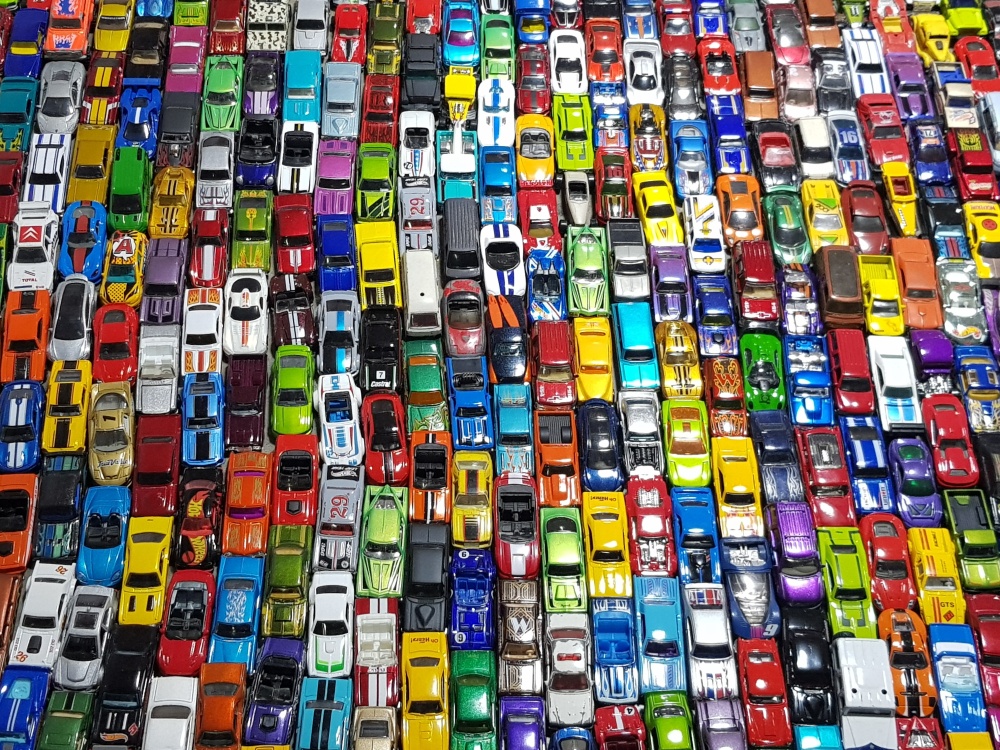 Sometimes the reference goes to the artist. This one got a nice room for display, probably because an actor painted it. Very interesting choice for a subject.

Sometimes the reference goes to the viewer. I’m including this mostly because I miss Robinson’s Manila. Also it was featured in the 1335Manila gallery, a place I’ve visited but somehow never blogged about.

And lastly: a defining hallmark of modern to contemporary art is witticism (think Ceci n’est une pipe). There were many pieces with puns and visual references attached.

I’m including this next piece because one of the small sculptures in our house was made by the same artist. Also, it’s an example of corporate-sponsored art, which I’ve always found to be a very interesting form of CSR.

The pun, if the tire and steel pipes did not clue you in, is in the shape of the sculpture.

New to Old to New

Reinventions of the old is commonplace in contemporary art. In a way, it is reminiscent of the renaissance. Rebirth meant to learn from the old in order to make way for the new. Or something like that –I’m no scholar.

But here are some pieces which deconstruct older ones in some way, shape or form.

Though it’s not evident in the photo, the artist displayed a video presentation challenging the historical artistic view of Southeast Asians, specifically the quaint, rural identity forwarded by the great artist Fernando Amorsolo.

The lens of the colonized is contrasted with the lens of the emancipated. To what extent should our heritage inform our identity?

I found it provocative. Who is the Southeast Asian artist? Who is the Filipino artist?

There was also a bit in the exhibit where you get to stare at people. As I said. Clever. 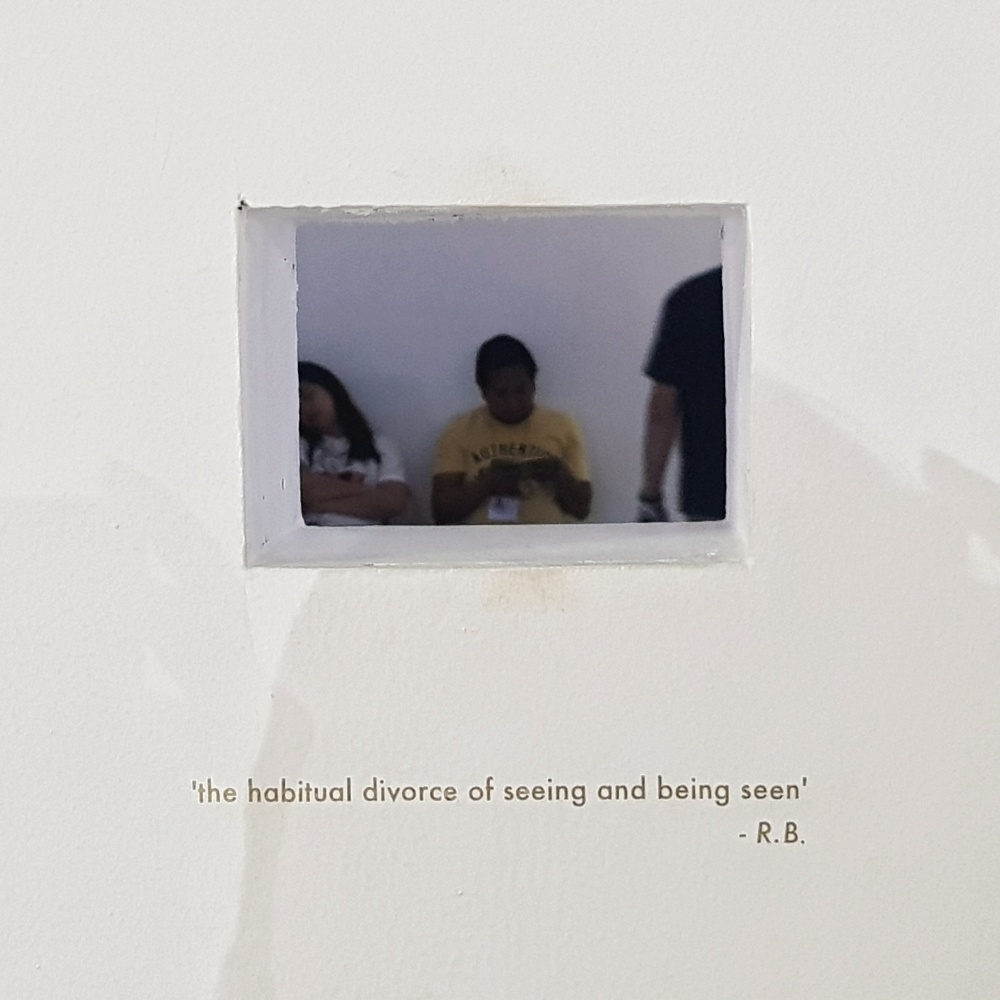 (There were many more such clocks.)

And another piece that was also promising, but somehow underwhelming. It was a mix of Luna’s Spolarium and colorful characters. Was it the placement in the gallery? The lighting? My mood?

Derivative pieces stop and make you think. What was the intention of the artist? What original intent or context is being subverted?

Such is the case here, in the remastering of the iconic Lunch atop a Skyscraper. There seems to be a new take on it every year. The different elements and stylistic decisions make you wonder.

The Identity of the Artist

There was a photograph of this specific piece featured on the instagram account of ArtFairPH a few days back. Without opening the link for more details, I could immediately tell who the artist was.

Marina Cruz has a reputation for working with clothing as the subject. I’ve seen her works in at least 1 museum and 1 other exhibit, and both times, clothes were central to the picture. Sometimes, as in here, it was a vibrant painting. Other times, actual clothing and notes were displayed.

It really pops out. I love the saturation and color.

Another artist that has built up an identity –at least in ArtFairPH, I’ve never seen his work elsewhere yet– is Daniel de la Cruz. Known for provocative, symbolic sculptures, you can find his exhibit by searching for the line of people waiting to go inside.

His exhibits usually offer an experience, complete with sound, and some form of social and religious commentary.

This year’s exhibit was entitled The Imaginarium.

I wonder what would happen if they deviate from their established style. Would people still recognize, let alone patronize, their new work? Or would it be too strange?

Art, anatomy and nature  (the creation)

The space where art marries anatomic forms is where I feel the best and the lightest.

I love Galerie Stephanie for featuring works that combine natural, anatomic and artistic elements. I will try to visit them in Shangri-la Mall in the future. 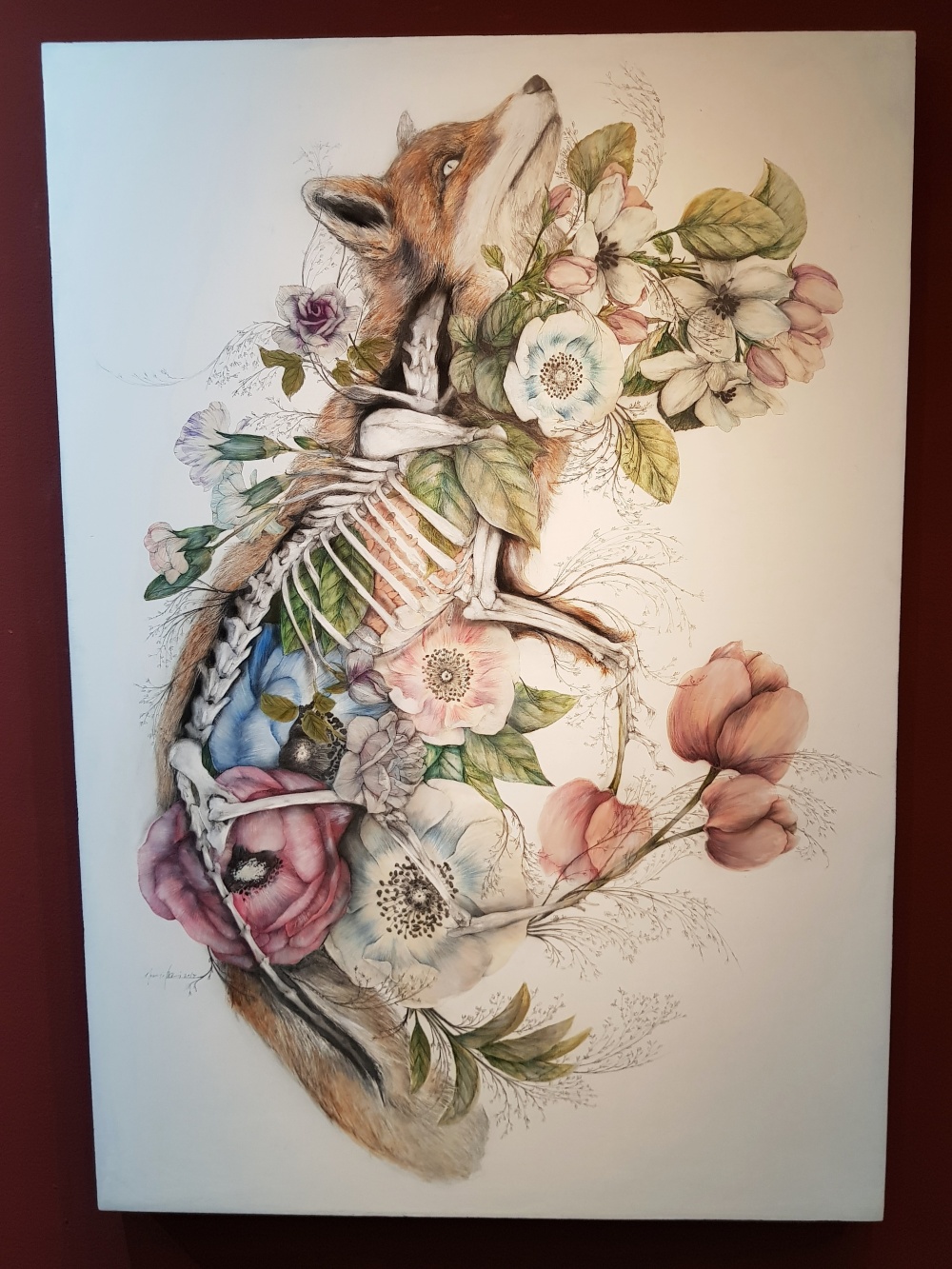 The collection was entitled Origins. Creation myths were depicted through a variety of media. Some were more to my taste than others. But I really like these ones I included here.

I don’t even want to give any opinions on these, because it’s not like I’ll make any sense. I just enjoyed looking at them.

It’s my aesthetic. This is the kind of art I’ll put up my walls.

Very fitting for last week’s obstetrics module, I could say.

I also love it when mixed media artists make use of naturally occurring materials to give their visions shape. In another gallery, there’s this piece made of pearl shell. I feel greedy just looking at it.

There were two galleries on two different floors that featured Arturo Luz (b. 1926), who is a Philippine National Artist awardee. 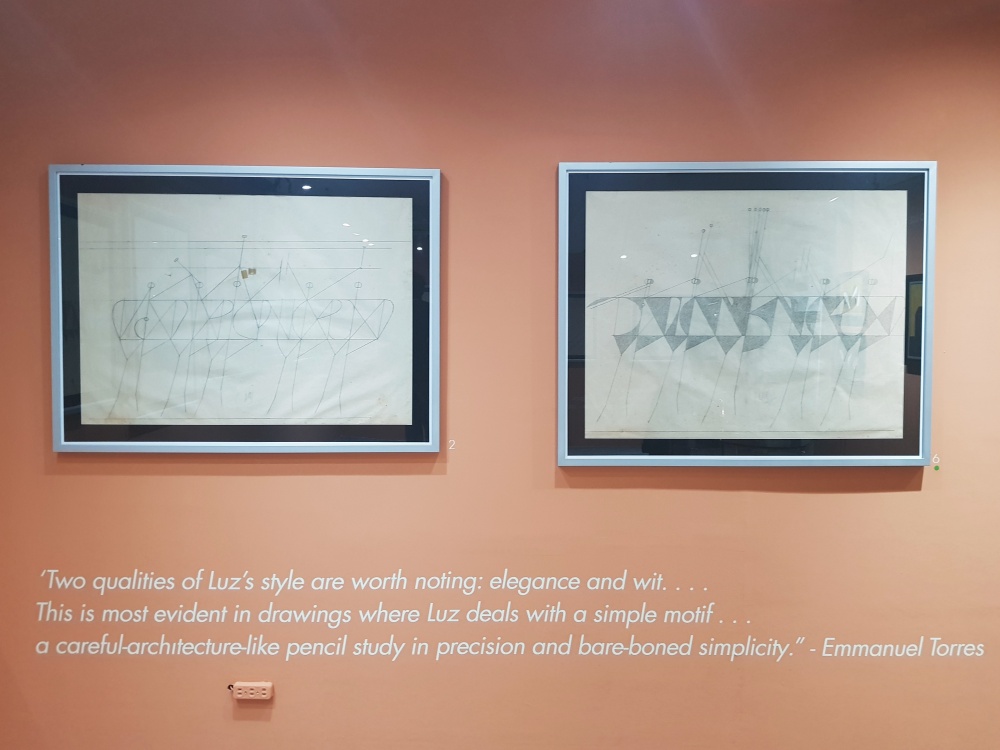 I heard one too many people say that they might as well just hang their own sketches if Arturo Luz’ works were already considered art, and I challenge them to do just that.

If they can even achieve half the fluidity of form and geometry, and the peacefulness of its simplicity, I would concede. 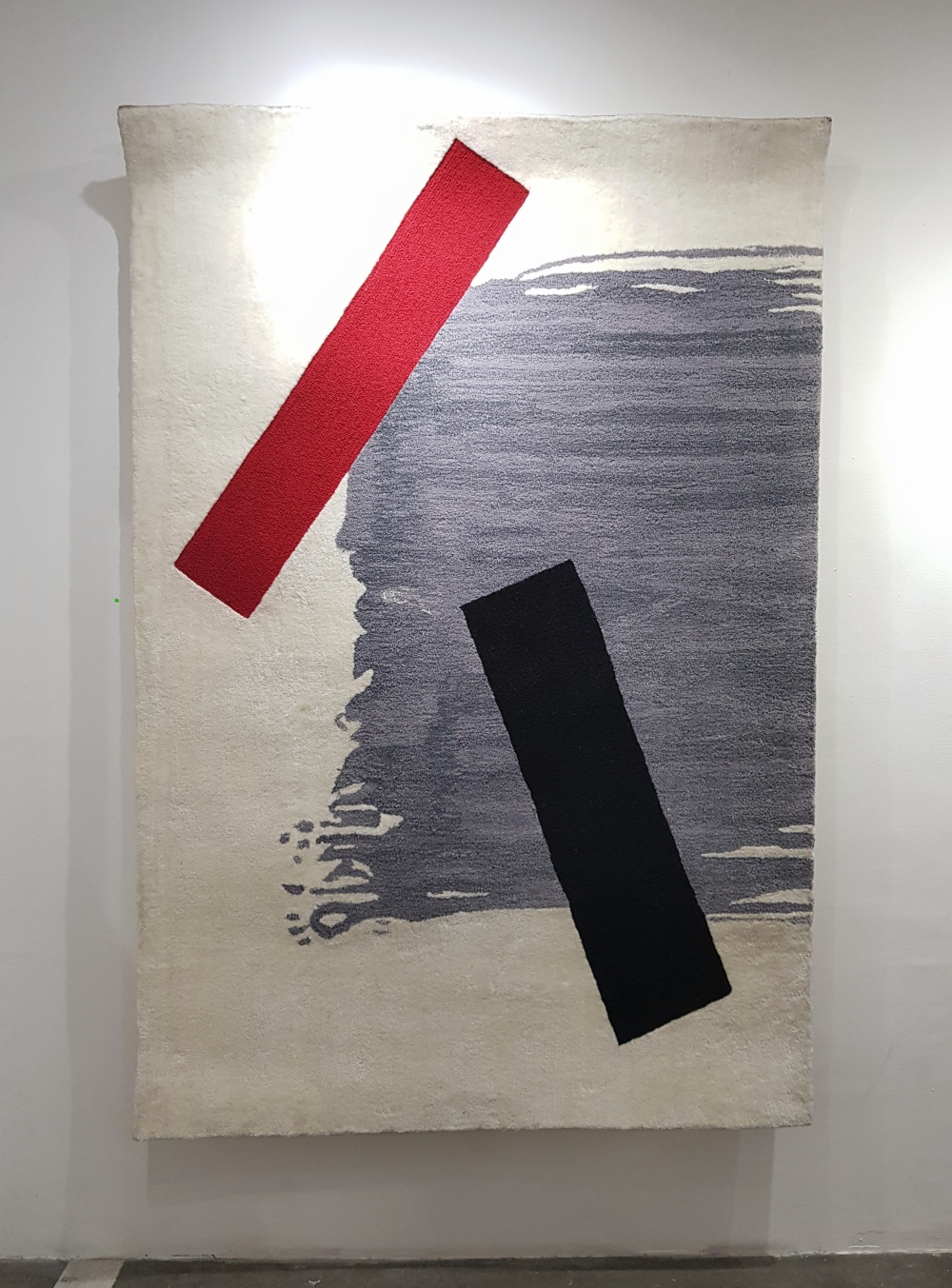 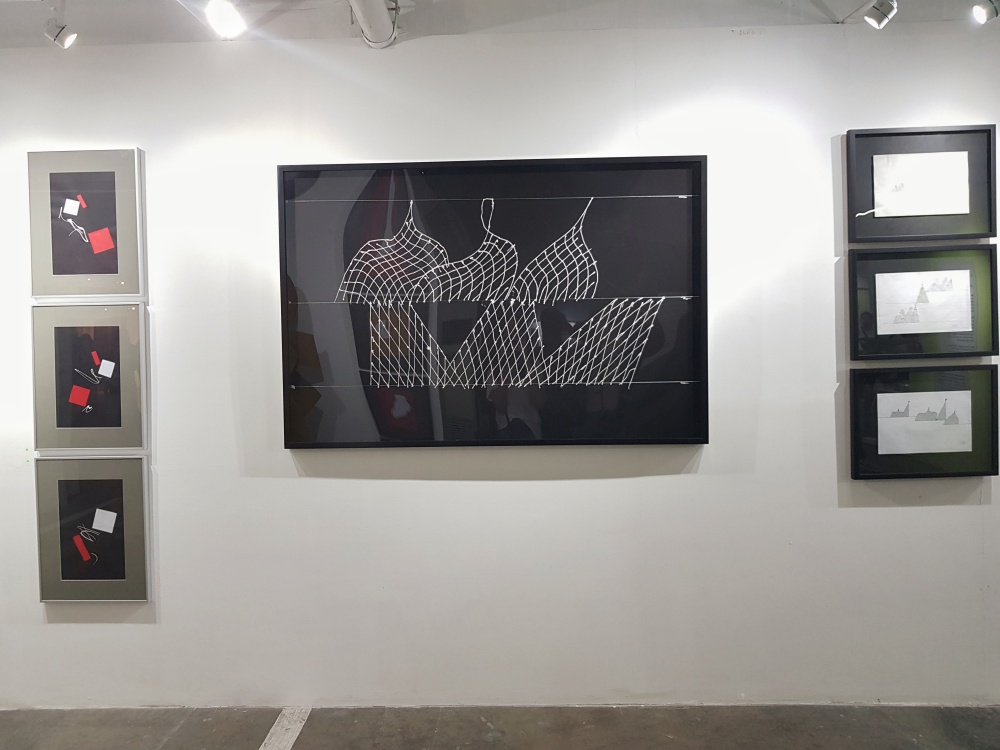 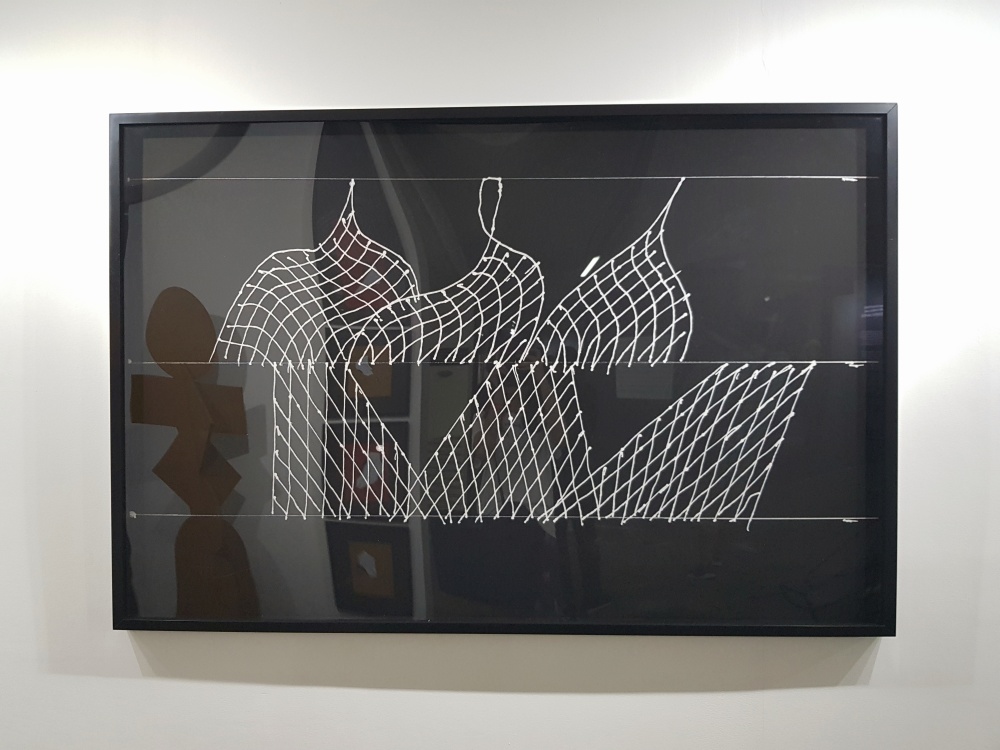 To be able to reduce a vision to clean lines and shapes, and still to communicate it, is a true gift.

This year, the art fair has included a dedicated section for photographs. Not very many stood out to me –maybe I still need to develop an eye for it– but some stories did the trick.

I’ll be honest. Of all visual art forms, I find photography the least affective. Done right, it can tell a story. Done plainly, and it’s unimpressive. A drop in an ocean of other technically perfect shots.

This next collection became more impressive because of its story.

Ramon C. Busa, one of the Golden Gays, writes: “It is one thing to be alone, but what we would consider the greatest poverty is the feeling of being unwanted”.

It’s the ending of an era.

Others, like this collection featuring the mountains of Benguet, seem visually unarousing. It’s the story on the mining crisis that makes it worth a second look.

Another year, another success. It gets only bigger and better from here.

Some people complain that it should be free, apparently, but those people have probably never heard of the cost of exhibit space in Ayala nor the financial need of the local artists being showcased.

I do think the gallery needs more food and drink concessionaires (let’s trust that none of the patrons will spill).

The walkways are too small and the gallery too big; it’s a spell for exhaustion for any goer.