Before you read this blog post, I want you to pull up your calendar and search for a free date. Pencil in your trip to the National Museum of Natural History. Just take my word for it. In fact, feel free to skip this entire post and just tell me how your own trip went.

The National Museum of Natural History is the investment in the arts and sciences that our nation deserves. The exhibits are carefully arranged and quite well-lit (except for the Orchard art hallway). Everything is focused on Philippine natural history, from our unique ecosystems to the history of botany and zoology in the country. This is how old government buildings should be treated.

Best of all, it’s free. Or worst of all. I really want to give them my money. Take my money!!!

This is the only natural history museum I’ve been to in recent memory. The closest might be the Mind Museum in BGC, which simply does not compare in breadth or depth. I’ve also probably visited a natural history museum in the US, but I can barely remember that. This recap may or may not have been influenced by my own enthusiasm.

What to Expect in the NMNH

If you’re reading this now, in 2018, expect that the NMNH is not yet open entirely for your pleasure. Several exciting floors are still closed, which is at least one reason for me to go back.

Other than that, you can expect great things. The first three floors are already open. There are enough interactive displays and informational exhibits to keep you occupied for roughly two hours.

The Breathtaking Tree of Life

Ever since I glimpsed the construction of the NMNH last year, I was wondering how the glass dome structure would look like. Turns out, it looks wonderful from the inside too. The Tree of Life, designed by Dominic Galicia architects and interior design firm, is one of the most imposing and also beautiful structures I’ve seen.

When I first saw the glass-domed courtyard in press release photos, I admit I first thought of the British Museum’s own imposing courtyard. But aside from the impression of a wide open space and the glass dome itself, the two are nothing alike.

The Tree of Life is an excellent symbol which encompasses what the museum stands for. It calls to mind phylogenetic trees (and other taxonomic trees, I guess), and the almost universal symbol of trees in different pantheons and religions. Apparently, this motif exists in some of our indigenous iconography.

We also read somewhere that it also represents the double-stranded structure of our own DNA. It literally translates to life.

“Lolong“, a named Crocodylus porosus, is one of the crowning highlights of the museum. I am sure it is one of the museum’s biggest crowd-puller. A well-made full-size replica of the Indo-Pacific 6-meter crocodile greets you at the base of the Tree of Life.

While the display is still a replica, I am confident that the taxidermied form will soon be available. After all, its full skeletal form greets you at the main entrance of the museum.

There’s a helpful information poster to the side of the displays. Like most of the plaques and descriptions in the museum, it is written in English.

There were a lot of other taxidermied animals in the museum. It’s like a zoo, but with dead animals.

If this museum was open back when I was an undergraduate reading biology in the University of the Philippines Manila, I would have been all over it every other weekend. Also, we would probably have had a mandatory field trip.

Many of the artefacts of the 2nd floor gallery (called “Our Natural Inheritance“) were a delight. There were displays and copies of books and instruments used by “The Pioneering Naturalists in the Philippines” (mostly religious Spaniards). You can even see a life-size copy (or original?) of Flora de Filipinas by Manuel Blanco, one of the most iconic botanical texts in our history.

Though we didn’t ask them anything, there were several National Museum personnel near the displays. Perhaps they could have been mini-tour guides?

There’s still plenty of room to expand. I think they can still explore existing mini-exhibits, like the section on “The Modern Naturalist” and this reproduction of an old apothecary.

This whole museum is a biology student’s dream.

I hope this museum further expands on the fields we (our country) are experts in, including rice sciences and alternative herbal medicine. As the museum expands, I’m sure it will also touch on other important and relevant sciences such as geology, volcanology, and meteorology.

After visiting this museum, I immediately tweeted my opinion: it’s a world-class museum. It wasn’t only the quality of the displays, but also their diversity.

There were several areas of the exhibits designed to be interactive. There are at least two “trees” where people –mostly children– could hang their opinions. One of them could be found in the natural inheritance exhibit.

Another “tree” could be found in a section dedicated to climate change. I wrote something uninspiring but at least I added it to the tree. I think it was little to the side of the biosphere in “The Marine Realm“.

There’s another section in the naturalist gallery where people can create leaf tracings, which I find amazing. I love botanical illustration.

Near the exhibit on climate change and biodiversity, there’s this wonderful corner which appealed to my inner Instagram fiend.

There’s also a whole section in the “Mangroves, Beaches and Intertidal Zones” gallery featuring a diorama of mangroves you can walk through. Mangroves are important, people!!! They protect shorelines from natural disasters, and they serve as homes for plenty of marine animals. 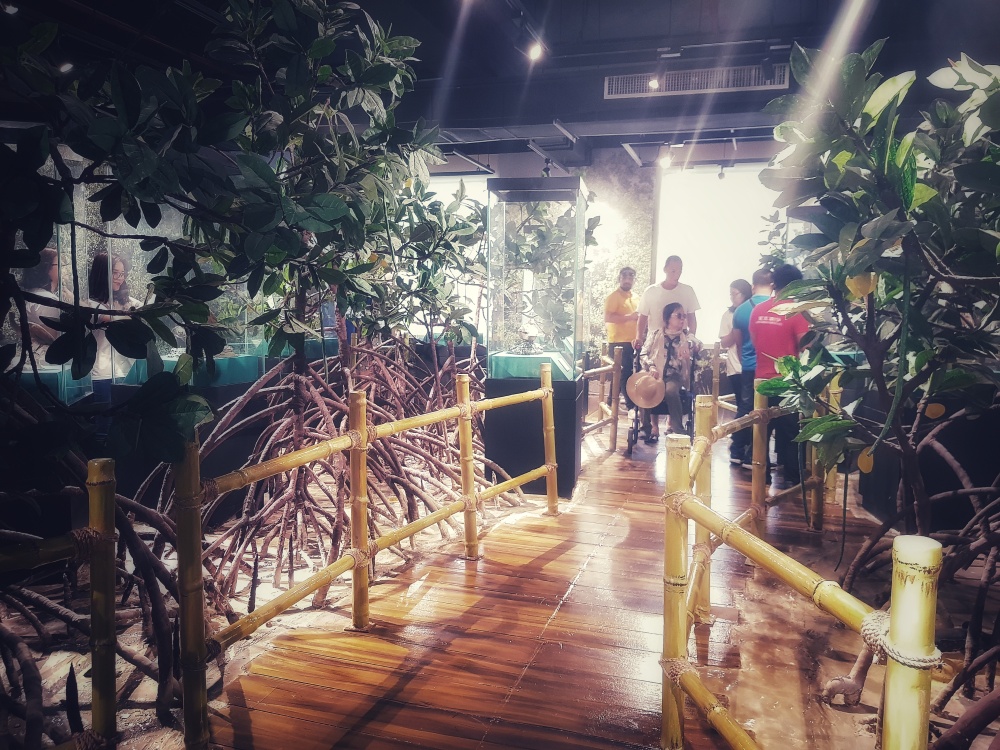 This next bit might not have been interactive, per se. It’s still funny though!

Plenty of tourists (and some disgraceful behavior)

I’m not sure if this will be the case all year-round, but there were plenty of people touring the National Museum of Natural History. We went early on a weekday.

The place is largely PWD-friendly. Getting to and fro places on a wheelchair will be no problem, since the main connection between floors is a ramp surrounding the Tree of Life courtyard. There’s also an elevator. For people who want to stay fit, there are stairs to the side. I wasn’t able to go to the washroom, so I can’t comment on their facilities.

On another note, the volume of people means that, statistically speaking, there will be a couple or a dozen who are simply annoying. I am a self-confessed blog-feed enthusiast, so I did take a lot of pictures; I would like to think I didn’t block anyone’s views or ruined anyone else’s good time. For me, there’s no problem with appreciating the exhibit and documenting memories at the same time.

BUT. I do have a problem with people who don’t know how museum displays work. There are very clear signs all over the place which say “DO NOT TOUCH”. The only exception are the interactive displays, which are so clearly and intuitively designed that you won’t mistake one for the other.

And yet there are people who do touch displays. There were plenty of these ammonite mollusks around, thanks to the Gotuaco family (they donated a lot of the fossils on the first floor), and they all look pretty priceless to me.

This mollusk is around 100 million years old… but I still saw someone touch them. Not just touch. Caress. Fondle. Repeatedly stroke in front of their own impressionable child.

Please do not touch displays!!!

Going to the National Museum of Natural History

I’m not really an expert at commuting. I’m not even sure why I’m trying here.

When I found out this museum is finally opening last May 18, the International Museum Day, I prayed for time to go faster. The day after our final exams, I made my way to Manila to complete the set.

At some point I wanted to say that, with the opening of this museum, there’s at least one thing our current President Duterte did right. Then I found out the whole project was under Aquino III. So in conclusion, Duterte still has done nothing to protect or forward my rights and interests as a citizen.

Thank you to M for coming with me to the museum! And for taking loads of pictures which I’m saving for a rainy day. Please visit her blog here. She writes mostly about her medical school life.

I blogged about my earlier experiences ‘touring’ Manila and the other museums here and here. Again, please visit our local and national museums! And don’t touch the displays!!!