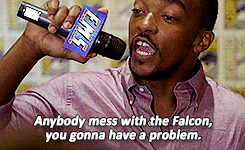 When Having Opinions Brings Rape Threats: A Captain America Story

I’m just so angry right now. The article boils down to the headline: a woman criticizes the work of a white guy in the comic book industry (Rick Remender) for portraying the Falcon (inebriated, if not drunk) having sex with a 22-year-old woman (who was thought to be a 14-year-old by a significant number of the audience) and just for that criticism she went on to receive rape threats, unsolicited dick pictures, stalked and humiliated online, with her name and personal details broadcasted against her will. Whether or not her criticism was unfounded (and no matter what anyone says, there’s really no such thing as an invalid criticism, wtf??), the response was overwhelmingly antagonistic and inhumane. Infantalized, patronized, condescended —basically disrespected, because she probably didn’t read the comics / interpreted too much / was too sensitive; nevermind that a hundred others joined the hashtag campaign to fire Rick Remender!